Cryotherapy For Less Than 35 Dollars 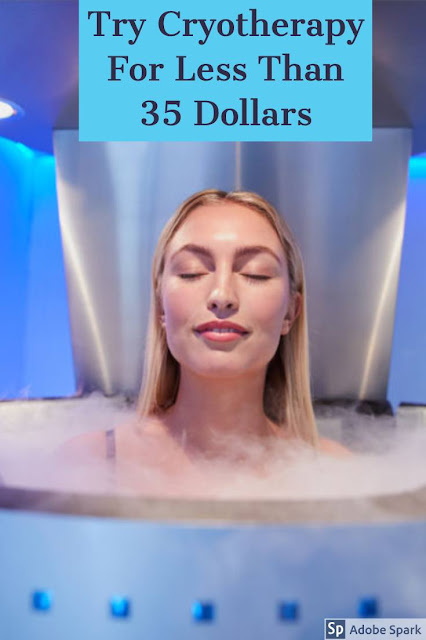 Try Cryotherapy When You Are on a Budget

I tried it twice, once by using a Groupon in Chicago and during the Thanksgiving holiday in Edwardsville Illinois. Each time I tried it, the price was under $35.

I loved the after-effects after I finished the treatment, but it was hard for me to stay in the chamber for more than two minutes. My body felt less achy and I had a euphoric feeling all over however, the thought of doing it once a week or even every two weeks, leaves me apprehensive. With that said, not everyone has that problem being subjected to cold temperatures. My sister loves it and can stay in the chamber for three minutes with no problem.

If you want to try it, there are plenty of deals on Groupon or look for a local cryotherapy spa because most of them have first-time user deals. If you don't know much about cryotherapy or the benefits of doing the process read all about it below.

Cryotherapy is known by another name that is “cold therapy.” This is a therapy that is carried out generally in low temperatures. The term cryotherapy comes from a Greek word meaning ‘cryo’ which means cold and therapy which means to ‘cure.’ Other medical terms of this therapy are cryosurgery and cryoablation. This therapy is used to cure skin problems. The treatment is carried out in extremely low temperatures to eliminate all the abnormal and diseased tissues.
Cryotherapy is one of the skin treatments that is also used in order to give you relief for your muscle pain, sprains as well as swellings that you experience after a surgery or tissue damage. The procedure of the treatment may vary in different cases. The treatments can be carried out through ice packs and giving patients a dip in the ice baths. And now, the "hot" way to do cryotherapy is to stand in a cryotherapy booth for up to three minutes.

However, cryotherapy is used all over the world but there is little evidence as to the effectiveness of the treatment. Though a number of studies have been conducted regarding cryotherapy in a really controlled environment, still desired results are not deduced.

How Does Cryotherapy Works?

How this procedure works? This is the most common question often asked by people who are ready to take chances with this therapy. Well, it is a new treatment and works total different as compared to other skin treatments.

The following information mentioned below will clear your confusion regarding this therapy and might answer all your queries.

The following are some of the benefits of cryotherapy.

With this treatment, you will witness cool temperature in your whole body which triggers due to physiological responses in your body. With cryotherapy, your body will release adrenaline, noradrenaline, and endorphins. This will produce a positive effect on your body if you are experiencing mood disorders which includes anxiety and depression.

It is also a fact that cryotherapy is not one of the best treatments that can effectively cure serious conditions. One study found out that people with arthritis use cryotherapy to reduce their pain. Although they cannot get rid of it completely. The study also concluded that the treatment can be easily tolerated.

Helpful in treating low-risk tumors
Well-Established and targeted cryotherapy can be used for the treatment of low-risk cancers. If it is used for this purpose then it is called cryosurgery. It works as it freezes the cancer cells. And after that, they surround them with ice crystals. At present, it is used to treat low-risk tumors for different cancers. This includes prostate cancer.

Helps in the prevention of dementia and Alzheimer's disease
However, more research should be carried out on this but it is speculated that cryotherapy may be helpful in the prevention of Alzheimer's and different forms of dementia. It is considered to be one of the effective treatments for these two diseases as with the help of antioxidants and anti-inflammatory effects it can help on combating the oxidative and inflammatory responses that are built up due to Alzheimer's.

Risks and Side Effects
Before using cryotherapy, it is highly advised that you consult a doctor. People who have a history of heart attacks have high blood pressure infections and seizures, if they are pregnant, are claustrophobic or have a pacemaker should not go for cryotherapy.

However, there are not always health risks regarding it but you are also risking your money which you have earned after a lot of hard work. You may not also get the desired result of using chemotherapy to reduce pain. However, the FDA does not consider it an effective method for the treatment of pain. They have also issued a formal update regarding this matter, which explains the risks of this therapy and its inability to cure. It clearly states that this method is not enough to treat for the conditions cryotherapy is promoted for.

Therapists should keep into consideration that there are a few side effects of Cryotherapy. Although the therapy is beneficial for reducing pain it can sometimes leave you with damaged tissues. This therapy can leave a temporary red mark on your skin. The whole process of cryotherapy should be monitored thoroughly and an ice pack should never be left on the skin for a long period of time this may cause damage. Precautionary measures should be taken before entering the cryotherapy chambers. It is also recommended that they do not wear jewelry or metal. Their dresses should be dry.

Conclusion:
If you have made up your mind to use this therapy it is suggested that you consult your doctor first before taking the first step forward. You should also keep in mind that this therapy is in its initial stages of development and it has its own benefits and demerits.

People with a high level of tolerance level can try this therapy without worry. Using it can turn out to be a life-changing experience for you. If you have enough money and your body can tolerate cold temperatures easily, then you must give it a try and see for yourself that it will be magic for your pain issues.