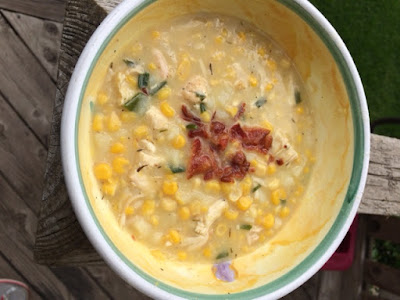 I found this recipe on the internet and it is by Del Monte. I pinned it in the autumn and said I would make the soup on a cold Chicago winter's day; I never got around to making it. Since the weather this spring has been up and down, I decided to try it yesterday.

The recipe uses a can of Del Monte low sodium cream of corn and low sodium whole kernel corn, low sodium chicken broth, green onions, low fat milk, Del Monte diced potatoes, thyme, flour, salt and pepper. I couldn't find the low sodium cream of corn so I bought the regular cream of corn. Since I have a milk allergy, I decided to make it with cashew milk. I bought unsweetened cashew milk by Silk but I wished I had bought the sweetened cashew milk. The recipe also called for cheddar cheese or sour cream but my client suggested bacon and I liked that idea better as a topping. Hey, I even went organic on one ingredient, I used my garden green onions which are already back and growing strong.

Here is my review of the soup:

I didn't like it right away because I think the thyme was too overwhelming but after letting it sit for hours before dinner, it tasted way better. Next time, I will use 1/2 teaspoon of thyme.  I felt the chowder could have been a little sweeter so next time I will use sweetened cashew milk. I loved the bacon as a topping and I only crushed up one slice for me and the hubby. The other two slices were crushed up and mixed into the soup. To my surprise, the hubby said he enjoyed it and was happy that I made something different other than my typical chicken noodle soup.

This recipe is two thumbs up and is affordable and healthy. You can follow the recipe as is or make the same changes I made. Let me know if you try it for your family one day.
Labels: Recipes