Battle Of The Badges Event Chicago 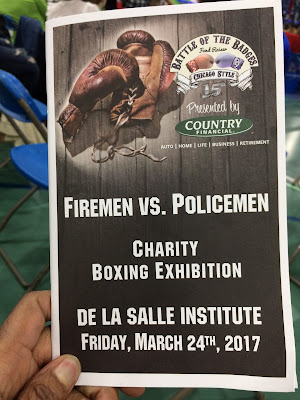 This was the first time I have seen boxing live. Like a lot of people, I have only watched it on television. The exhibition started with children from local park districts battling in their weight class. This is a great idea to teach children a skill and to learn to handle aggressive behavior. It inspired me to look for boxing gyms near my home.

After the Jr. Boxing event, they started with the Battle Of The Badges with the opening ceremonies. The police and fireman color guards entered first, followed by the pipes and drums for the Chicago Police and Fire departments. After the procession, the musical performances began with The Star Spangled Banner, and then Country Financial presented the check to the chiefs of both the police and fire departments. 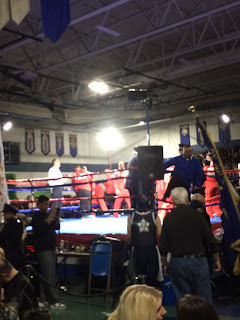 The main event began with the firemen versus the policemen. Each boxing events were short, they were only three rounds so they were over very quickly. The best part of the night was when the judge would announce the winner and if they said it were a fireman or a policeman, the cheers and the boos would go up simultaneous and they were LOUD. There was a lot of support for each side in the audience.

I forgot to mention that I got to meet Yuri Sardov an actor from NBC's Chicago Fire. On the show he plays Brian "Otis" Zvonecek, Firehouse 51's rescue specialist. He was very nice and very much in shape. I was able to discuss with him his daily training program. After each fight, the winner got a picture with him along with his or her trophy belt.

I was reading the program for Battle Of The Badges and I found that Country Financial is offering 5% off their car insurance to qualified applicants. Thanks to their sponsorship, these following charities will benefit from this exhibition: 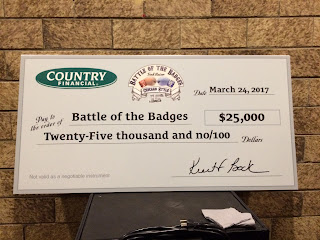 It was a great event and loads of fun and I hope I can attend next year. For more information on Battle Of The Badges or Country Financial, please visit the sites in my blog post.
This is a sponsored conversation written by me on behalf of COUNTRY Financial. The opinions and text are all mine.