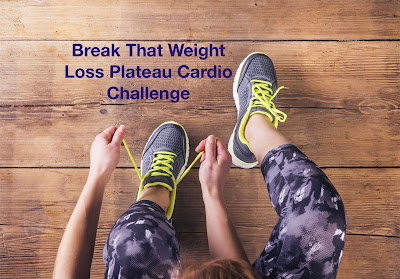 Have you been stuck at a certain weight for weeks and it is leaving you a little frustrated? If so, I would like for you to try my Break That Weight Loss Plateau Cardio Challenge for two weeks.

In order to break that weight loss plateau, you must increase the intensity of your workouts. You might be in a rut and have been doing the same thing for weeks or months. In order to continue losing, you must stimulate your metabolism from time to time. For example, I started with a client whose biggest complaint was that she wasn't losing any weight. Upon examining her workout, I found out for eight months she stayed on the same speed at 3.0 mph on the treadmill, she said she didn't even sweat during her workouts anymore. Because she was hesitant about increasing her speed,  I told her to increase the incline to 2% to 4% without holding on to the side or front rails. It worked because two weeks later, she lost another 1.5 pounds. 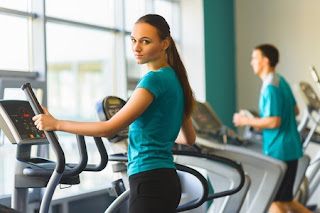 There are other ways that might help you break that plateau and that would be to decrease your daily calorie intake, to increase the amount of sleep you are getting and to under estimate the amount of calories you are burning when exercising.

When I workout on cardiovascular machines such as the bike and treadmill, I like to input a weight that  is five pounds less than my current weight. If I use the Precor elliptical, I decrease my weight by 20% because ellipticals have a tendency to overestimate the amount of calories you burn up to 40%. If you aren't sure what to do, use the 20% rule on your total calories burned during the workout session. If your machine or FitBit says you burned 600 calories subtract 20%-30% of the total from what you burned. Your caloric intake for that session would 480 calories instead of 600 is you subtract 20% from the total calories. In the weight loss battle, it is better to underestimate your calories than to overestimate them.
*Treadmills are the most accurate of all the cardiovascular machines when you are able to input your weight before working out.

Back to the challenge, if you are ready to start back losing weight again, download this two week challenge and tell some friends to join you, as they say, more the merrier.
What's Included:
How to guide
Two week fitness journal for the challenge
$2.95

Buy it on Etsy